When I was young and learning to fly fish I was given a tattered book on trout fishing by a curmudgeonly old friend of my fathers. He took me aside, gruffly told me that I should read the book as it contained a wealth of useful information, attempted a wry smile and shuffled off.

The book was “Trout fishing from all angles” by Eric Taverner. The first edition was originally published in 1929. 448 pages long with 250 illustrations. It was a weighty tome for a 9 year old to digest but I gave it my best. Much of what I read initially made little sense but the many illustrations helped clear some of the confusion.

Over the years I’ve re-read many of the chapters and I would have to say that with experience the sage advice I received with the book was absolutely correct. It is a treasure trove of information and unfortunately some of what it covers has been either superceded by technology or lost in the annals of the sport. The problem was though that you simply have to fish for many years before all of the jigsaw pieces fall into place and the information becomes logical and relevant.

There is one chapter in particular which is fascinating and that is a sixteen page treatise on analysing rise forms. This chapter summarises much of what had been learned through observation by the masters, GEM Skues, Harding, Lamond and Taverner himself. These fly fishermen pioneered the sport and their observational and analytical skills were legendary. This book was published in their hey day so it must have been cutting edge at the time. 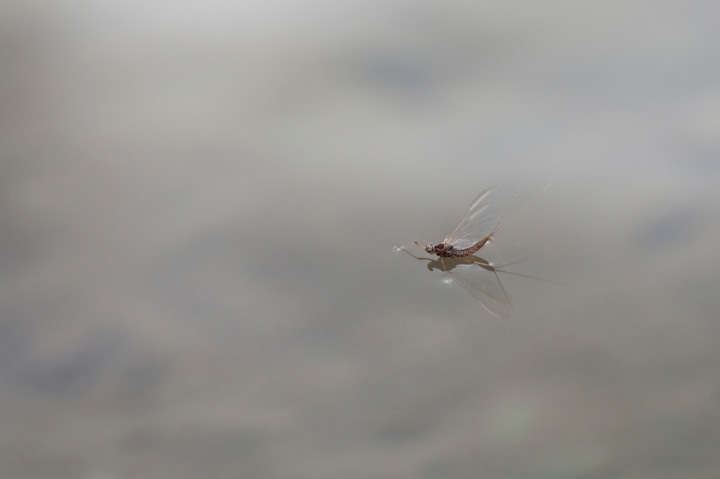 Back in the day analysing trout rise forms was considered a necessary skill for dry fly and nymph fishermen. Those skilled in the art could look at a surface disturbance, characterise it as bulging, humping, tailing, sucking, sipping, slashing, pyramid, kidney, head and tail, porpoise roll or spotted ring and accurately determine what the trout was feeding on and where in the water column it was feeding. In some cases they even counted the number of tiny bubbles appearing within the ring formed as the trout rose to determine what fly to use. This is a skill which I fear may no longer be in the repertoire of most anglers.

We used to fish on dusk and into darkness during my formative years so analysing rise forms was difficult and at the time I thought it was irrelevant. How wrong I was. Pyramid rises are easy to spot and indicate the fish is probably feeding on hatching sedges. Slashing rises are a sign that the trout is feeding on running sedges or large terrestrials. Spotted ring rises most often indicate the fish is feeding on spent spinners and on it goes. Identify the rise, pick the fly, fish your imitation at the right place in the water column and watch your success rate improve.

I thought that I’d summarise the various rise forms and reproduce the illustrations from “Trout fishing from all angles” as they are probably relevant in NZ. It would be a shame not to share such valuable information. 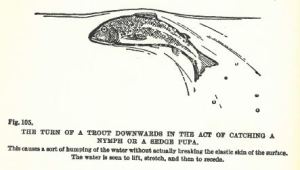 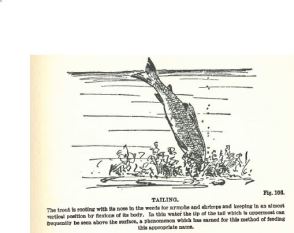 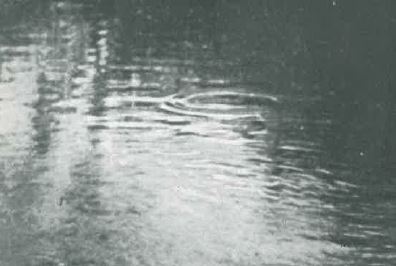 Most of the key information on what the fish are feeding on when they rise in a certain manner is listed in the following table:-

However, Taverner issues a note of caution in using this information. “The peculiarities of a rise form are not easy to observe. Often it cannot be said with certainty what fly has been taken; the rings of each pattern proceed so rapidly outwards that the pattern is always in a state of change throughout the three or four seconds which is its maximum duration; the pattern made by a trout when taking a given fly is altered tremendously by a variation in the pace of water; a near view of the rings is often out of the question and one rise form in particular only occurs at dusk or in the semi-darkness. Elucidation of problems like these presented by rise forms is only worthwhile if the solutions can be connected with the natural fly and tested out straightaway with the artificial.”

So there you have it. Observe, compare and experiment. Record what you find and see if any patterns emerge. I’m sure that when you adopt this approach you will unearth learnings that will improve your dry fly success rate. Ultimately it is up to us to see whether the UK findings from the 1920’s hold true in NZ but if they do then wouldn’t it be a fascinating discovery?

Note: The stunning images accompanying this article were generously provided by the multi talented Tim Angeli. Check out his work on:- http://angelimedia.com/

how to hunt with slingshots catapults aiming and the law
Feb 22, 2017